Apricot kernels are the seeds obtained from the pits of Apricot fruits. Apricot Kernels are also referred as “Bitter Almonds”, and “Apricot Almonds”. Apricots kernels originate from Armenia and are indigenous to the Himalayan region and parts of Asia, but they can be found all around the globe at the moment.

These seeds are very popular because of their unique and outstanding taste along with the various uses in herbal medication. The main usage that is proposed by Naturizon is for snacking or using Apricot kernel an ingredient for making baked goods. 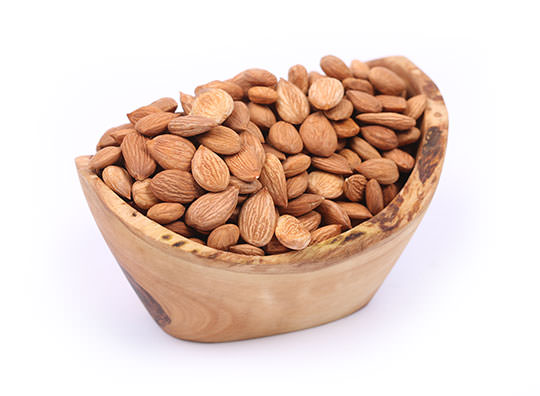 The clinical term for Apricot kernels is Prunus Armerniaca. Apricot kernel extracts, oils and the seed itself believed to be helpful in reducing effects variety of illnesses. Consumption of large amounts of apricot kernel at once is considered to be hazardous to the health of humans and may lead to serious illness, or fatal in some cases. This product is not recommended for pregnant women to consume since it may cause serious or fatal damage.

The claims mentioned below are NOT clinically proven.

Apricot kernel is a seed and should not be kept or stored in direct sunlight or in a humid area. They should be stored in a cool and dry place. The Product should not be placed in freezer. Ideal storage temperature is 5 °C to 15 °C.

Apricot kernels can be consumed as a snack by itself. Other methods of consumption include slicing, dicing, powdering the seeds to use as ingredients while cooking or baking. The sweet taste of these seeds are highly admired in sweets and baking goods.

The bitter Apricot kernel is considered to be a significant source of Amygdalin, also known as Vitamin B-17. Amygdalin is believed to have the capability to reduce the growth of cancer, but there is no significant medical evidence available to prove this claim.

A major side effect of Apricot kernel is that it may release traces of cyanide into our body and lead to cyanide poisoning. A few mild symptoms related to cyanide poisoning are nausea, headache, dizziness, and vomiting. The symptoms can increase to shortness of breath, low oxygen in blood stream, nerve damage, and reduced alertness. Very high dosage consumption of apricot kernels can result in liver damage or can be fatal in very rare cases.

Please consult a medical professional before using Apricot kernels as natural medication.  It is not recommended for pregnant or breast-feeding women to consume Apricot kernels.