The pistachio tree is native to regions of Central Asia, including present-day Iran and Afghanistan. Archaeology shows that pistachio seeds were a common food as early as 6750 BCE. The modern pistachio P. vera was first cultivated in Bronze Age Central Asia, where the earliest example is from Djarkutan, modern Uzbekistan.

Pistachio trees were introduced from Asia to Europe in the 1st Century AD by the Romans. They are cultivated across southern Europe and North Africa.

In the 19th century, the pistachio was cultivated commercially in parts of the English-speaking world, such as Australia along with New Mexico and California where it was introduced in 1854 as a garden tree. In 1904 and 1905, David Fairchild of the United States Department of Agriculture introduced hardier cultivars to California collected from China, but it was not promoted as a commercial crop until 1929. Walter T. Swingle’s pistachios from Syria had already fruited well at Niles, California, by 1917.

Please contact our office regarding Pistachios in shell size availability and details.

The products are roasted locally based on client requirements to maintain freshness and ensure the quality of the final product. The varieties of roasting currently available includes: 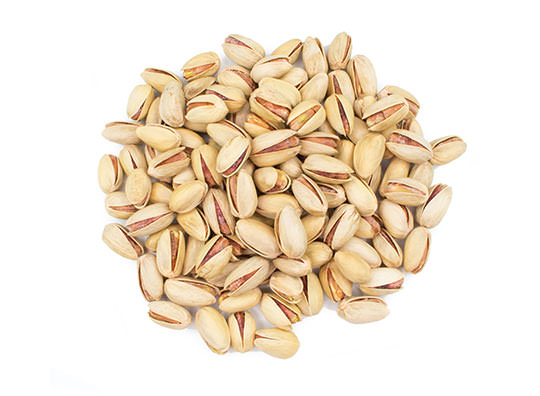 In July 2003, the United States Food and Drug Administration approved the first qualified health claim specific to consumption of seeds (including pistachios) to lower the risk of heart disease: “Scientific evidence suggests but does not prove that eating 1.5 ounces (42.5 g) per day of most nuts, such as pistachios, as part of a diet low in saturated fat and cholesterol may reduce the risk of heart disease”. Although a typical serving of pistachios supplies substantial calories (nutrition table), their consumption in normal amounts is not associated with weight gain or obesity.

The pistachios should be stored in a cold and dry place away from sun light and humidity.

Pistachios in shell can be consumed raw in their Natural state. Pistachios can be roasted and various flavors can be added to desired taste.

As with other tree seeds, aflatoxin is found in poorly harvested or processed pistachios. Aflatoxins are potent carcinogenic chemicals produced by molds such as Aspergillus flavus and Aspergillus parasiticus. The mold contamination may occur from soil, poor storage, and spread by pests. High levels of mold growth typically appear as gray to black filament-like growth. It is unsafe to eat mold-infected and aflatoxin-contaminated pistachios.

We take extra precaution and conduct various testing prior to importing and distribution of such products to ensure the safety on the products we offer to our clients.